You may have seen the videos of Dub FX creating a live mash-up set on some rooftop somewhere (if you havent it’s at the bottom of this article), it’s pretty cool to see and even more fun to do. In response to recent question from a Traktor Tips reader I have decided to create a tutorial to show you how simple it really is to record samples in Traktor using the microphone and S4. And how to build a fun track using samples of your voice and other tracks.

Now I am no talented beat-boxer and definitely don’t have a singing voice, this tutorial is just a bit of fun so you can see how it works, so please no making fun of my vocal skills!

What do I need for this tutorial?

When you plug-in the microphone, to the back of the S4, make sure the gain level is up, which means turning it to the right as you look at the knob from the back. By default the S4 routes this microphone through deck D. Before you will notice the microphone working, you need to make sure that you turn deck D to a live input using the drop down to the top right corner of the deck.

You’ll know it is working as you’ll see the blue LED light up in the channel fader.

The loop recorder allows you to record your either the main output, the cue, an external input, or an auxiliary input. For this exercise we will set the Loop recorder to record from the cue channel, so any channel you wish to sample will need the cue button highlighted as ‘on’, for it to work.

The loop recorder has its own latency setting. You will have to play around with this to get the settings just right so that everything works smoothly and in time with one another. To do this I recommend you use two clean tracks, with a distinct kick drum. You will have to sample one track for four beats or more and play alongside another track to test the latency set up. If the track you sample appears to start slightly behind the track you’re playing, then you need to lower the latency level. This might take you a little bit of time to figure out. It may be different for all computers, but I found a sweet spot for me to be around 9 ms.

How to sample a track and test the latency 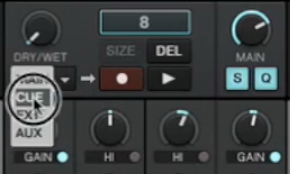 The loop recorder will record sound coming from a number of different sources. You first have to make sure you select the source you want to record from. As mentioned, we will record from the cue. Setting the loop recorder to cue, will record anything that is sent to the cue channel. In other words anything with the cue button activated (this is usually used to listen to a track in the headphones, whilst mixing it in).

Once you’ve created your sample it will automatically play in the loop recorder, however if you have the loop recorder set all the way to dry, as mentioned, you will not hear it. At this point you can turn the dry wet knob to the right to see how it sounds, or check it out in headphones. Once you have the sample you want, you’re going to want to load it into a remix deck cell. (Note: The shift key on the S4 may cause issues with that beat-grid if you have not locked the grid.)

Recording a new sample into the loop recorder

Once there is already a sample in the loop recorder, you will need to get rid of that sample before you can record another. In order to do this you must:

If you do not clear the loop recorder, the next recording will record ‘into’ the previous recording. This is known as overdubbing and the loop will just gain more and more audio, layering each recording onto the previous one. This is a great way to layer more sounds before moving the sample to the remix deck, as the remix decks only have four slots that you can use.

In the header of the remix deck you will see a section that enables you to change the load location, from deck A, to deck B, or to the loop recorder. You need to change this to the loop recorder in order to capture a sample from a location. Once this is set correctly simply pressing one of the sample buttons on deck C of the S4, will load the sample into that related cell. You should now do the following:-

Once you have set the latency to the desired position, you are ready to create more samples.

Recording from the Mic

The mic plugs into the mic socket on the back of S4, you can set the gain to your desired level, usually up high. As the mic uses channel D, you must set channel D’s cue to on. It is now a simple case of inventing something creative to record into the mic. Once you know what you’re going to say:

Once you’ve got the technical stuff nailed, it’s time to get creative. The video tutorial will show you how to do all of this, except for how to be creative! I apologise for my singing voice, however, it will only encourage you; knowing that you are better than me.

This process is a lot of fun and I encourage you to practice so that you can perform this type of routine out live.

Have you been using this technique already? Have you found this article and video helpful? All your feedback is encouraged, thank you