No DJ gig is ever the same! Even if we were to play the exact same set, you would notice that something was different about it. It might be the way in which the crowd received it, or maybe the way you delivered it, whatever it is, be sure in the knowledge that you can never have two identical DJ gigs. This is my main reason for expressing my belief that it’s better to know your music than to plan a DJ set.

Planning a DJ set can often be beneficial, but it can also be extremely restrictive and limiting. Having a plan is good, but an inability to waiver from the plan, is going to destroy you as a DJ.

People plan DJ sets because they want to include certain tracks or they know how perfectly two specific tracks work together and they want to show others. Another reason for planning a set is for a ‘mix tape’ that you’re piecing together at home or in the studio. Maybe you DJ as a duo and you have a set routine that you have discussed, and know where you want to take it.

My advice to you here would be to make the plan flexible.

Yes, you can plan a set that involves exact cue points, countdowns, and specific points at which you press play, or place an effect, but being strict with creativity, stifles creativity. Planned DJ sets lack impulse and soul. A rehearsed set feels rehearsed and the energy that goes into the performance, is that of restriction and rules, rather than passion and spontaneity .

Having strict guidelines for a DJ set places pressure on the DJ, and as such, it is the plan that takes over the set. This steals the creative process away from the DJ and turns the set into a confined, structural and calculated, two dimensional piece of work.

By allowing flexibility and freedom to appear in your DJ sets, you add that third dimension of creation and spontaneity. 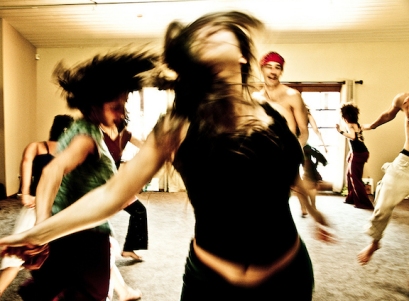 An Intentional Dance Journey is the best thing to happen to electronic music. People gather in a clean and present state of mind, no drugs and no alcohol. The people present are there to set an intention, or to work through their emotions via the medium of dance. These events allow people to drop their masks and experience music the way it was intended. Movement is a critical part of healing and dance has been an integral part of that from as far back as tribal times.

Intentional dance journeys allow us as individuals to express ourselves fully whilst releasing all judgement of one’s self and all others. It is the connection of body and soul helped along by the vibrations of music. Unfortunately dance music has been hijacked by drugs and ego, and a night out has turned into a battle of egos rather than a journey into the music. This is where intentional dance journeys re-connect people with their own power to be who they are, in a safe and supportive environment.

So back to planned sets:

When I first became involved in the intentional dance journeys, I had a limited understanding of the necessary music for these events. The co-creator of the dance, used to prepare her own iTunes playlists and simply play the music right from her laptop connected to a speaker. Upon finding a DJ, the journey became more flowing and those dancing were able to fully immerse themselves into the music, with no breaks.

The co-creator had a true connection with the music and could foresee the direction in which each specific journey was to take. For this reason the mix was structured. It had a specific route, it needed to start slow, build up and return back to restful. Not only was tempo important, but the feeling invoked by each track was essential to connecting with the relevant chakras, allowing the journey to unfold and work the different aspects of the dancer’s psyche and energetics.

I would be given one hours worth of music, most of which I had never heard before and instructed to thicken it out to two hours. Sometimes I received the music as I arrived at the event. This created stress for me, but by giving into the mystery, I was somehow able to piece something together as I went. Learning to feel the music would be the key to creating an amazing dance journey.

I needed to find balance though, and decided to request the playlist about a week out from the event. I found that this gave me the chance to listen to the music and to find tracks I had, that would work with the existing list. Planning out an exact set, meant it was too structured and would re-add a level of stress, but simply creating a folder with the right kind of tracks would be the best way to feel prepared and yet liberated.

In my example above, I was helped along by having the skeleton of the set already laid out for me. It’s easy for me to flesh it out with similar tracks, with similar intentions. But when you don’t have this luxury, what do you do?

Often, when we create a playlist, or folder of tracks for the gig, we picture what the gig will look like. We imagine the room, we imagine the vibe, we imagine the people. Whilst this can be a great way to feel what music might be right for a party, your imagination might be way off what actually transpires.

I recently played at an outdoor event and I threw a bunch of tracks into a folder based on my imagination. They worked great for my sunny afternoon opener, but as the night progressed and the vibe of the place unfolded, I realised that my ‘night-time’ playlist collection I had built, was not gonna cut this crowd.

I sat down behind the DJ booth 30 minutes before I was to go on, throwing together a new playlist. The playlist was constructed based on me watching the crowd and feeling the music that I was searching for. As I previewed tracks, I looked up at the crowd and could imagine their reaction to the track I was pre-listening to. If I could see them go off, I would add that track, if the track felt too weak to me, I would move on and find another.

After 10 – 15 minutes I had an awesome playlist of awesome breaks that I knew would work.

The moral to this story is that no matter how much you imagine what your night is going to be like, knowing your music and being flexible to change, is what’s going to make you succeed on the night.

Thankfully, I knew where to look on my computer for the right tracks, I had time before the gig to sink into the crowds energy and I was ready.

Feel the Music, Crowd and Energy

There seems to be an invisible sixth sense to a good DJ, it’s that ability to read the subtleties of energy. When a person is grounded and receptive to the energies around them, they are able to feel through a situation.

It’s an ability that we all have and it needs to be given more attention than the part of you that wants to be in-charge.

The part that ‘thinks’, or the part that is controlled by ego, wants to assert something that it feels it knows best. When you are able to release this aspect and truly connect with a deeper knowing, harnessed by the heart, only then can we create something wonderful.

Tap into the world of the unknown, release some of your control to the mystery and find balance between a planned set and an intuitive one. Feel the music, know your collection, and be at one with those stood on the other side of the decks!