Having bought my first pair of DJ turntables back in the early 90’s at the age of 14, I’m no stranger to dance music! In fact, dance music has percolated my life in some form or another, each day, from that point onwards.

It all began with the large mix tape packs from helterskelter and fantazia, with names like Ratpack, Seduction & Mickey Finn frequenting the Sony Walkman.

Most weekends through my 20’s were spent in nightclubs, often behind the decks, but mainly as the clubber. Those days were magical and looking back over them; I have a romanticized idea of how they truly were.

Since I hit my 30’s the regularity of nights out dropped dramatically, yet there was a yearning of sorts, for things to be as they were through the previous decade. Was this down to me not wanting to lose my youth, or was it a genuine love of the music?

The dynamics changed, I continued to collect and play music at home, and occasionally obliged with a request to play a party or small gathering for friends, but the excitement had faded.

It’s not easy to pinpoint a specific reason for the lack of drive, perhaps it was down to a failed dream, or a maturing of sorts? Often when listening to music my heart skips a beat, I smile and feel the passion re-ignite. I nod my head to the beat and see a former iteration of myself dancing in a smoke filled room, lights flashing, bass pumping my rib cage!

I write these words sat in a hotel in Berlin.

Berlin, the capital of dance music and an unbelievable techno scene with over 400 venues to choose from and an unthinkable line up of talent to wet your appetite.

It therefore made complete sense that I felt a tug to head out somewhere to delve deep into the scene. Part of me excited, part of me apprehensive, part of me confused!

Something was pulling on my heart strings, telling me to go out, a friend had placed me on the guest-list of Tresor, so I had nothing to lose.

The 37 year old part of me that loves going to sleep decided however, to go to bed and set an alarm for 5.15am so that I could go catch the tail end of the gig.

Tresor opens at midnight and goes on until an unknown time, but the flyer said midday on Sunday. ‘Perfect’ I thought, I could get in a good few hours of dancing to some heavy techno and with the line up guaranteed to be banging I went to bed excited to awake for a ‘breakfast’ of beats and flashing lights.

I arrived at the club after a brief 20 minute journey through a snowy Berlin at about 6am, there was no line up at the door, which caused me to ask the door staff if this was the main entrance!

Confirming that it was, I was allowed entry after giving my name and I was in.

I felt the excitement that any clubber will know, the feeling that is so well portrayed in the movie, ‘Human Traffic’. The joy of achievement, the sweet sound of success and the understanding that a dancefloor isn’t far away.

Moving through the bare bricked, concrete floored hallways, pulsating with strobes and the rumble of bass, my eyes grew larger as I eagerly drew nearer to the first peek at the dancefloor. 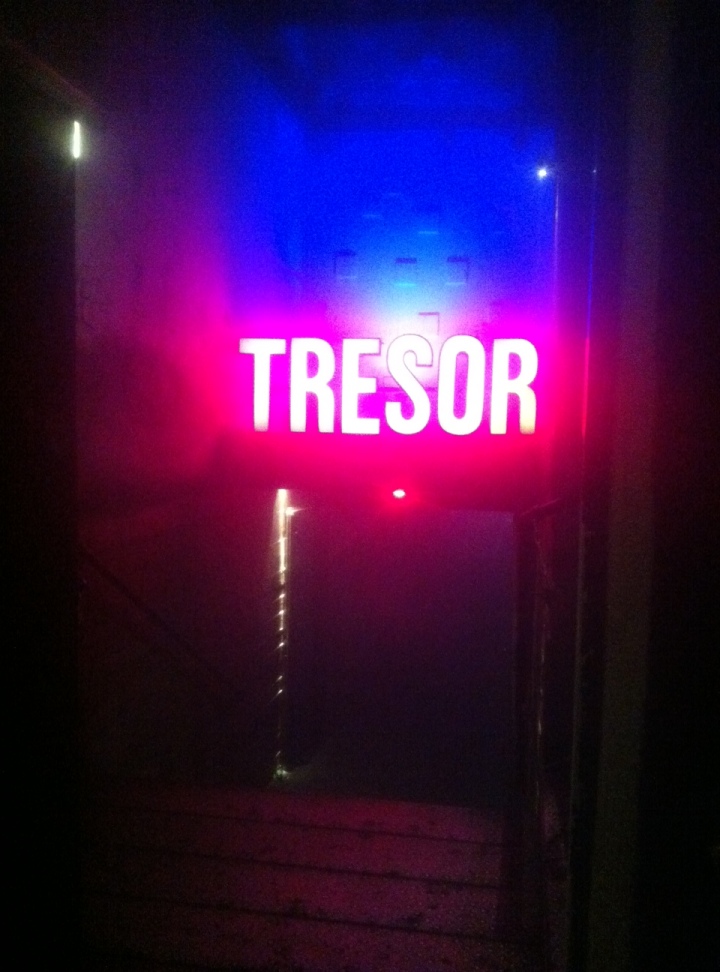 Flashing lights and smoke filled my senses, punctuated by complete darkness, for 10 minutes I was in techno heaven.

I decided to check out the Globus room and was treated to some gentler techno from Kenneth Christiansen a nice vibe, but with a somewhat tired dancefloor.

I felt the familiar joy and excitement that previous club nights had given me. DJ’ing is in my bones and I was wishing I could take this experience home and re-create it in some disused building or underground cave.

Within minutes, this feeling escaped me.

The nights activities seem to have taken their toll on the last 30 or so stragglers and what I can only imagine as a dreamlike state of euphoric togetherness, had been infiltrated by the harsh reality of what was clearly, from my sober perspective, a disjointed crowd of nicotine-inhaling, overly exhausted, lost souls.

As I began to feel short of breath due to the intensity of cigarette smoke, I moved around the club in the hope that I may once again find harmony in the fading memory of a ‘proper night out’.

After an hour of bouncing between a glimmer of good music and feeling uncomfortable, the fire alarm sounded! A signal of how dense the cigarette smoke was! As a non-smoker, used to the clean air of Canadian establishments, I found myself choking on the smoke at one point and it was then that I decided to hang up my clubbing socks!

I had returned to the hotel before the Sun even rose, disappointed, yet content.

Content because the trip went smoothly, I got in no problem, and I briefly glimpsed a part of me that I once enjoyed; the excitement of escapism and music.

Disappointed because every item of clothing I wore wreaked of smoke, and despite a shower and the time it has taken for me to to piece these words together, I am unable to escape the stench!

So, as I listen to a DJ set in my headphones from the comfort of my hotel room I am able to discern that I am still in love with music, but that the experience of a club brings an ambivalence that is difficult to describe.

Whilst there is a connection to the raw, dirty, heavy side of dance music, I feel there’s a job to be done in raising the vibration of the planet and it’s inhabitants. Tresor did not play a part in this for me this morning. Whilst I can see the attraction, I have now finally realised that it’s time for me to move on.

Music is extremely powerful and can be used as a tool for healing. The environment in which it is enjoyed also plays a huge part. I feel it’s time to find a way that music can be delivered to people in a way that promotes health rather than destruction.

Listening to and playing music, is a passion of mine, but my lesson here is that if my passion is detrimental to my health, then I either need to re-assess my passion, or re-align it in a way so that is nourishes my body mind and soul.

Stay tuned for the next instalment of re-aligning my passion…
EDIT: November 14th 2017 – Just published on Resident advisor: “Wellness and Dance Music” – It seems it’s not just me that is turning the tide!

One thought on “Clubbed Out?”