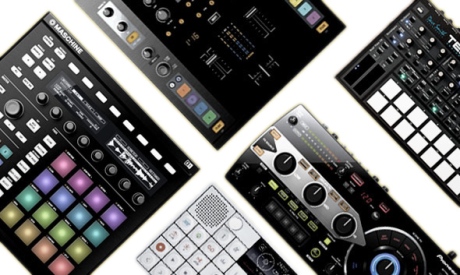 Before you go make it rain, put your wallet away and let me tell you about RGAS.

I’ve got a confession to make, I’m a recovering gear addict.

I’ve been DJing for almost 6 years and in that time, I’ve spent over $11,000 on DJ gear, and that doesn’t even account for production related gear like synths, monitors, software, and sound cards.

Everything that I do as a DJ today could be done with the second controller I ever purchased, a VCI 100, and a simple 2 channel sound card. (Not that I’m saying go out and buy a VCI100, quite the opposite!)

If I really needed to, I could DJ strictly with a laptop. I might be a little slower but I could still rock a crowd and no one would notice.

So why am I sharing this with you?

My hope is to shed some light on how to save some money and time by sharing what has taken me 6 years, and a lot of money, to learn.

Note: This is not a medical condition, don’t consult your doctor because there is no pill or quick fix (someone should make that).

First we need to define RGAS and what causes it. RGAS is exactly what it sounds like. It’s acquiring a lot of gear in rapid succession. This happens in cycles, like binge drinking or partying. You go all out and you tell yourself never again.

Time passes and you’re at it again, hopefully not both at the same time. Impaired judgement + gear purchasing = maxed out credit card. Sometimes you’re upgrading existing gear (whether this is necessary is subjective) or getting complimentary things like new DJ headphones, studio monitors, or additional midi controllers for more control.

As most of you know, DJ gear isn’t cheap. This can result in acquiring a lot of expensive equipment and draining your bank account very quickly.

There’s a lot of factors that play into it, but the main influences would come from:

Each one of these influences the RGAS cycle.

As gear comes out with new features, companies hit you with awesome performance video’s, showcasing how “easy” it is to be creative with their new product. Then a rapid increase in coverage (blogs, forums, video’s) creates a sense of urgency. You don’t want to be left behind, you need the newest gear too. It can feel like you aren’t a real DJ, or that you can’t improve as a DJ unless you have _____ product.

So now that we know a bit about RGAS let me tell you about my own personal RGAS experience and how to avoid it.

Here is the gear that I’ve owned over the years, most of which I no longer own.

You might think to yourself, “Man I wish I had all that sweet gear.” Or that I make a lot of money as a DJ to afford all this.

The truth is, I’ve probably just started to see positive returns in the last 1-2 years. I would probably have significantly more money and even be a better DJ if I had stopped chasing new gear and really focused on what I already had.

1) “Having all this gear would make me a better DJ”

There is no correlation between being a great DJ and having tons of gear. Work with what you have, don’t wait for new gear to fix or improve you. Having a lot of gear can actually result in being average at best, since each piece of gear requires time and practice to master. It can make you feel productive and professional but in most cases it’s a distraction from focusing on things that really matter.

Just remember, every time you invest money in new gear, you also have to invest time in learning how to use it. No equipment comes without a learning curve.

2) “Imagine all the possibilities with this gear”

Sure I could use all this gear in a set and it would look cool, but it adds a lot of complexity and wouldn’t allow for an efficient workflow. Always aim to simplify your setup as much as possible to the point where you don’t have to think about what you’re doing. Eliminate any redundancies and streamline where possible.

3) “I’ve been DJing for a while, but I need industry standard gear to be a real DJ”

Focus on fundamentals of DJing, not specific tools. Fundamentals carry over to other gear/tools/software. A carpenter could build the same house regardless of what hammer he’s using. Gear also doesn’t increase your ROI as a DJ. A club owner isn’t going to say, “because you’re using this equipment, i’m going to pay you an extra $100”.

Lastly do not, I repeat DO NOT let the opinion of other “real DJ’s” influence your gear choices or pick gear that “real DJ’s” use. The average person (your crowd) doesn’t care what gear you’re using. If there’s music coming out the speakers that’s all that matters.

4) “I need this gear for this feature”

DJ software provides a lot of flexibility and customization, especially Traktor. Perfect example: you don’t need to spend $700 on a Kontrol S4 to get flux mode. This can be mapped to a midi controller you already own, even to your computer keyboard.

This drives me crazy. It is now easier and more affordable than ever to start learning to DJ, yet people insist on dropping their credit cards on huge gear purchases. This is unnecessary, instead you can start learning by using DJ software. Most companies offer demo’s for free that you can download.

Here’s a link for Traktor Pro 2.

All the gear in the world doesn’t make a great DJ and there is no magic device that will make a good DJ a great DJ.

Rather then looking for an external fix, embrace limitations and master what you have.

Qbert, the best scratch DJ in the world, has gotten to the point where he doesn’t even need a mixer anymore:

I’m not against buying gear. However i’m against buying gear that you don’t need or for the wrong reasons. Unfortunately we’re human and we’re incredibly crafty when it comes to justifying and rationalizing our reasons, to others and ourselves.

Before you get lost in the RGAS cycle, really be honest with yourself and ask if you really need it or if you’re buying it for external validation (“real DJ’s”).

If you think you really need it, see if you can try out the gear by borrowing it, renting it, or trying it out in a store nearby. No one would buy a car without test driving it first. If that’s not possible, read the manual. You should understand how it works before you even own it.

FINALLY if you’re just starting out, download some demo software and just start using it. Even better, download it and find some tutorials to help guide you along.

You’ve probably all heard this before but it’s worth repeating: “It’s not the tool (gear, controller, mixer software), it’s how you use it“